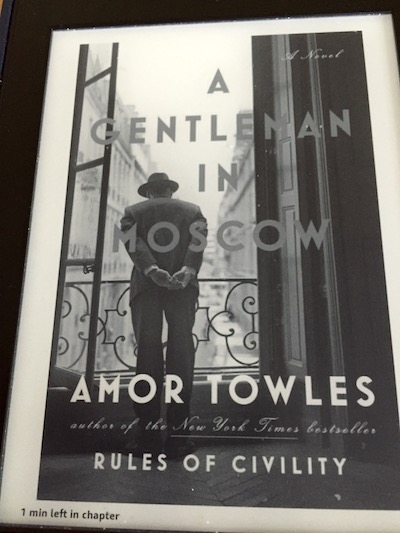 After the US Presidential Election, I was a tad despondent. Picking up A Gentleman in Moscow was part of my personal self-care, along with listening to classical music and watching Pride and Prejudice. Why? Elegance makes me feel better. Civilization is still there, it’s just being overshadowed by something else right now.

But also because A Gentleman in Moscow takes place right after the Russian Revolution. The communists have just come into power, and the gentleman in question, Count Alexander Rostov, has been placed under house arrest in an the premier hotel in Moscow. The exploration of how to be civilized and stand for what you believe in during a regime that basically wants to forget you exist and repudiates what you stand for is a thread through the book that was helpful.

Which isn’t the overall point of the novel – it’s more about how to master your circumstances, rather than your circumstances mastering you. How do you stay sane when you’re not allowed to leave the hotel in which you live, having been relegated to a garret apartment? But because his exile is in the Metropol Hotel (again, the best in Moscow), he gets to meet a wide swath of people, including foreign journalists and ambassadors, not to mention see a number of the party congresses that need a place to meet.

It’s just as elegant and in favor of civilization as Rules of Civility was. Both books are highly recommended.