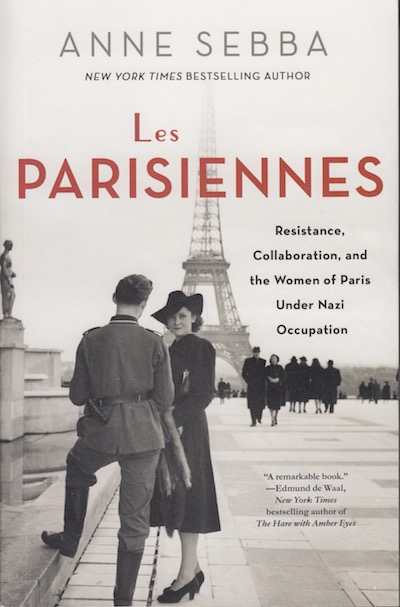 Les Parisiennes tells the stories of women who lived in Paris during World War II. It is a complicated book, structurally, with far too many individual stories told to keep track of all of the people. There is a six page list of all of the women mentioned in the book, before the index, if you want to be a better person than me and actively try to keep them all in your head.

I didn’t worry about keeping everyone straight because that’s not really the point of the narrative. Les Parisiennes is arranged chronologically and that has the advantage of reminding you that Paris is a big city, full of different people who asked themselves “what do I need to do to survive?” and answered differently. There are the women who collaborated, those who resisted loudly, those who resisted quietly, and those who did what they had to in the gray area in between.

I learned about Drancy, the holding area for prisoners before they were sent to concentration camps. During the early 1944 chapters of the book, it does leave Paris for Ravensbrück, the women’s concentration camp. Because it’s a third-person account it’s less emotional than, say, Survival in Auschwitz, but it was still nightmare-inducing. I couldn’t read these chapters before bedtime.

The most light-hearted part of the book is, of course, about fashion. No one writes a book about Paris and without including the fashion industry. You learn about the codes embroidered onto hats and belts and about the rather insane turbans women would wear just to piss off the Nazis. There is one memorable photograph of a woman, keeping watch on the top of a building during the liberation of Paris in 1944, wearing a lovely flowered skirt and sling-back heels with a helmet, holding a machine gun.

The juxtaposition of the soft and the hard in that photograph is what makes it interesting and it’s the jumble of all these women’s stories told together that makes Les Parisiennes work.