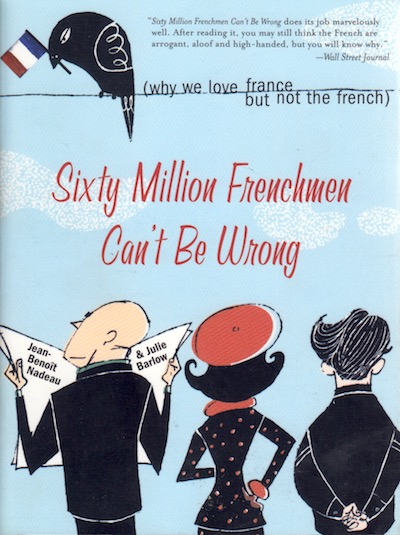 I first came across Sixty Million Frenchmen Can’t Be Wrong in the early 2000s, when I was a stay-at-home mom and had a baby. You’d think that I’d’ve had plenty of time to read, but you’d be wrong.

Fast-forward to a couple of months ago, when I saw this book come through the donations at work. (One of the best perks about being a paid employee at a library’s friends organization is that you get to see all the donations.) I grabbed it almost immediately. And then I was disappointed by it.

Why? I’m still not sure: it’s full of cultural observations that made sense, but the last time it was published in the 2000s. A lot has happened in Europe and France and Paris since then – the financial crisis, the rise of social media, the re-rise of the National Front (if it ever really went away). The World War II generation is passing on, and with that, a lot of the things that defined how politics work. I couldn’t get over the feeling that it wasn’t as relevant as it would have been 13 years ago. Which is when I should have read it.

If I had read it then. I’d probably have enjoyed it more and learned more too. That’ll teach me to clear off my to-read list occasionally, and not just let it build up.