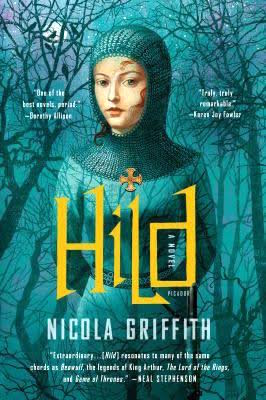 Hild is a fictional account exploring how St Hilda became a saint in the first place. What was her life like? What was it like to live in 8th/9th century Britain?

Intellectually, it’s a good book. But I never really lost myself in its world. Part of it was that I had some problems with the place/person names (early English is CRAZY).

The main thing I had problems getting over though, was this. This is a book about a child – it starts when she is about 4 and ends when she gets married. Hild never acts as a child, except perhaps in the very first scene. She’s always thinking politically, plotting and gathering information. Her judgement is unfailingly correct, and she is wise beyond her years.

Look: different time, different place. She and her mother are both ambitious and their positions at court are precarious. Lives were shorter, people had more responsibility earlier, and you had to grow up faster. But she is still a child.

Hild is a near-perfect person from a very early age. It isn’t so much about her becoming a saint as it is showing the otherworldliness of someone who already is a saint.

Which makes it different than most fiction (at least that I usually read) about people making mistakes and figuring out who they are. She already knows.