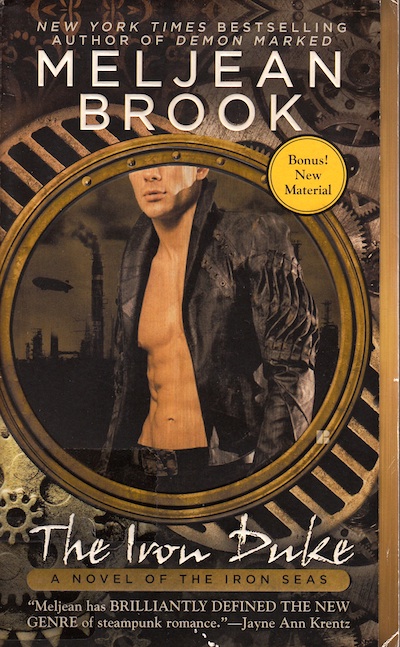 What’s it about?
This review is actually going to be for the part of The Iron Seas series that I’ve read so far: The Iron Duke, Riveted, and The Kraken King. So: what are these books about? They are steampunk romances. In this world, Genghis Khan’s hordes made it all the way to Europe, and his Mongolian Empire never fell. The Horde is mechanically inclined and has learned how to mechanically graft things on to people – so, for example, if they decide you’re going to be a miner, you might lose your lower arm and get a shovel or a pick-axe grafted on instead. They don’t sound like particularly pleasant rulers. But it is the late 1800s now; the Horde never took over Scandinavia, and Britain has just successfully rebelled. Europe, however, is a no-go zone and Japan is firmly entrenched Horde territory. One of the books takes place in London and Africa; one is in North America and Iceland; the last is Australia – where the Japanese fled when the Horde invaded.

Why should you read them?
I am generally skeptical of romance books. I’m not personally great with emotions, and I’m not so much with the stories that are all about the back-and-forth of your romantic intentions. But this NPR’s summer books theme this year is romance and I like steampunk and Meljean Brook was highly recommended. And I was looking for an audiobook I could check out from my library. Riveted fit the bill.

And I was impressed. Riveted was a good adventure, the heroine was strong, it dealt gracefully with social issues (hitting both gay and disabled issues) and the hero wasn’t an ass. The Kraken King’s hero was shockingly emotionally intelligent. The Iron Duke… sigh. He can’t express his emotions *and* there’s a rape scene. Not so much with that one. Oh, and the portrayal of evolution is more than a little appalling.

So: I have gotten over my disdain of romance novels enough to thoroughly enjoy these. I plan to read the rest of the series.