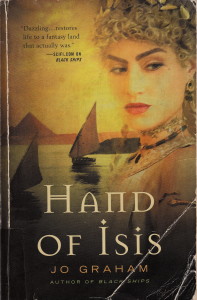 What’s it about?
Honestly, Hand of Isis was a did-not-finish for me. So, this is a summary to the point I finished. There are three daughters of the Pharaoh Ptolemy Auletes: Iras, Charmaine, and Cleopatra. Yes, that Cleopatra. She’s legitimate, the other two are daughters of slaves. They’re all half-sisters, rather than full. The two illegitimate daughters become Cleopatra’s handmaidens and we follow their education and exploits as Pompey the Great first defeats Egypt to take over Cyprus which leads to the downfall of the Pharaoh, which leads to various of Cleopatra’s siblings to take over the throne – she’s the third daughter and fifth child – which leads to a lot of moving around and power struggles.

Why should you read it?
I picked it up because I’m starting a side project about Cleopatra and I thought a fun historical novel would be a good way to get into the subject. However, even though I got about 100 pages into Hand of Isis, once I set it down, I never felt the pull to pick it up again. So it turned into a did-not-finish book because I have so many other books to read. Your milage might vary – it is the third in a series, so you might enjoy it for other reasons. But for me, it was just sort of meh.