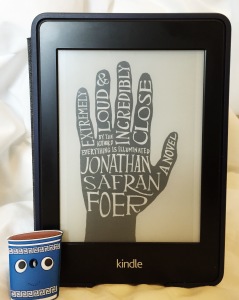 What’s it about?
Extremely Loud & Incredibly Close is about a boy whose father is killed in the 9/11 attacks on the World Trade Center in NYC. He’s gifted and a little weird and has a mother who is seemingly completely uninterested in him. Or maybe he’s just uninterested in his mother. He was certainly closer to his father. He’s going on a quest to solve a mystery he thinks his father left him.

Why should you read it?
Don’t. At least, I couldn’t. I couldn’t get over the odd writing style – meant to convey the main character’s high intelligence and immaturity, but I found it distracting. I also couldn’t get over the mother’s seeming disinterest in her son. I get that she wanted to let him grieve in his own way, and I also get that he was pushing her away. But to be so completely disconnected? No.