The Mitford Scandal is a cozy mystery that takes place in the late 1920s and early 1930s in London, Paris, and Venice. It’s the third in a series whose conceit is that Louisa Cannon is a ladies maid to each Mitford Sister. Each volume is about her helping out the next sister. Since this is the third book, this is the one that features Diana.

A quick aside: the Mitford Sisters were a bit like the Kardashians of their day. Nancy was the oldest, never married, and became a famous novelist. Pamela was the second, a bit of a homebody and possibly bi? or a lesbian? it’s unclear, given that she was the one who liked to stay out of the spotlight. Diana was the third sister and initially married Brian Guinness, of Guinness Brewing fame. But after a few years of marriage, she fell head over heels in love with Oswald Mosley, the head of the British Fascists and big Hitler fan. (Diana: beautiful but morally reprehensible.). Unity Mitford was the fourth sister, moved to Berlin and somehow managed to catch Hitler’s eye. When Britain declared war on Germany, she couldn’t bear it and shot herself in the head (she lived, somehow, for about ten more years). The fifth sister was Jessica, known as Decca. Decca was a committed communist and ran away from home before she was eighteen, and ended up living in San Francisco as a journalist. The final sister was Deborah, who had kind of had enough drama from her sisters. She did, however, become Lady Chatsworth, and navigated the family estate through some very harsh times and managed to turn it into a successful business.

The mystery is about what you’d expect from a cozy mystery: some poisonings, a bit of generational tension, nothing graphic, and lots of glamorous locations. My issue is with the character of Diana.

If you read the long aside, you know that Diana was a fascist and an anti-semite. The Mitford Scandal basically ends right around the time she’s met Mosley, but before she’s left Brian for him. And Louisa doesn’t particularly like Diana, but she’s also very much treated with kid gloves. Diana is a person to quietly move away from rather than a person to be called out. She is beautiful and moves in very high society, which are definitely privileges. But I wanted her to be described as more than “cold” and have more than the few questionable character moments.

And I get that you can’t portray Diana as the fascist she was in a cozy mystery, especially not when you need to have Louisa stay in her employ for four years. So I feel like she is given a bit of a pass, and that didn’t sit well. Honestly, this is going to be a bigger problem in the next volume, because Unity moves to Berlin and becomes Hitler’s friend – I don’t know how you get around who she was and still keep it a cozy mystery.

Anyway: The Mitford Scandal is a decent cozy mystery, but do be aware of the white supremacist character being toned down for your consumption. 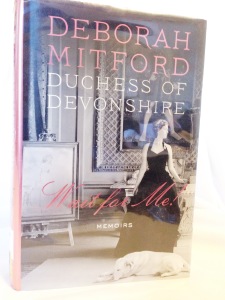 What’s it about?
Wait for Me is an autobiography of the Duchess of Devonshire, aka Deborah Mitford, the youngest of the Mitford sisters. The Mitford sisters were, in some ways, the original Paris & Nikki Hilton – the six of them were famous  mostly for being rich and pretty in the 1930s. They also had some disturbing tendencies towards fascism (except for Jessica, who was a dyed-in-the-wool communist) (Unity was all the way into fascism; it was more than a disturbing tendency). Deborah was much more traditional than her sisters, not getting into extreme politics and marrying right before war rationing kicked in. She does kick a lot of butt – she claims to only have been a housewife, but she was a housewife to an alcoholic husband and she oversaw the rebuilding of Chatsworth House into a fully-fledged business that could not only pay for itself, but eventually turn a profit.

Why should you read it?
Sadly, I’m not sure you should. The Duchess was an amazing woman, but the book was forgettable. I checked it out of the library after she passed away a little over a month ago; when I went to enter it into Goodreads, it turns out that I’d read it two years ago and completely forgotten it. I decided to read it again anyway, but didn’t find it interesting enough to continue with. There are better biographies of the sisters.