Carnitas has always been a bit mysterious to this white woman from the midwest. It’s delicious, yes, but could I tell you what’s in it? Nope. But! We found a recipe, and it turned out to be one of those recipes that was basically: put a bunch of ingredients in a pot and then walk away for a couple of hours. I can do that. Then we had some yummy tacos for dinner – plus leftovers.

Adjust oven rack to lower-middle position and heat oven to 300F. Combine all ingredients (1t salt, 0.5t pepper) except the orange in a large dutch over (the liquid should just cover the meat). Juice the orange into a bowl and remove any seeds. Put the juice and the spent orange halves into a pot. Bring to a simmer on the stovetop, then cover and put into the oven until the meat is soft and falls apart when prodded with a fork, about two hours.

Remove the pot from the oven and turn the oven to broil. Using a slotted spoon, transfer the meat to a bowl; remove the orange halves, onion, and bay leaves from the cooking liquid and discard. Place the pot over high heat and simmer the liquid until thick and syrupy, 8-12 minutes. You should have about 1c of liquid.

Using two forks, pull each piece of pork in half. Fold in the reduced liquid, season with salt & pepper to taste. Spread the pork in an even layer on a wire rack set inside a baking sheet or broiler pan. Place the sheet on the lower-middle rack and broil until the top of the meat is well browned but not charred and the edges are slightly crisp, 5-8 minutes. Flip the meat over and continue to broil until the other side is the same, another 5-8 minutes.

We’ve made Thai Rice Soup a couple of times now. It’s a good soup that doesn’t take a super-long time. I’m not sure I’d recommend it for a weeknight, but maybe a weeknight if you have a little extra time. It’s spicy but not too much so.

Once again, this is from Milk Street’s Tuesday Nights cookbook. It’s still a recommended purchase. 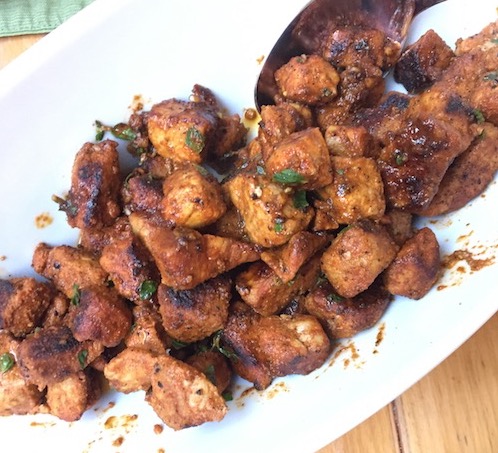 This gem of a weeknight dish is known around our house as “pork bites” and often gets paired with some sort of potatoes (roasted, french fries, probably even tater tots once) for an easy-ish weeknight meal. It has the added bonus of being way more delicious than it should be.


Mix spices together, add pork and toss to coat evenly until no more spices remain in the bowl (that is, they’re all stuck to the meat and not sitting in the bottom of the bowl). Let the pork sit for 30-60 minutes at room temperature. In another bowl, mix the lemon juice, honey, and garlic.

Heat 1T olive oil in a large skillet over high heat. Add the meat in a single layer and cook without moving until deeply brown on one side (~3min). Then flip pork until cooked through and browned all over, another 2-3 minutes.  Off the heat, toss with the lemon-garlic mixture until evenly coated. Move to serving platter, sprinkle the oregano and drizzle the last 1T olive oil.

Adapted from Milk Street Magazine, a cooking magazine I’d HIGHLY recommend, if for no other reason than their Tuesday night section where they give you about a week’s worth of delicious recipes that truly only take 30 minutes to make.