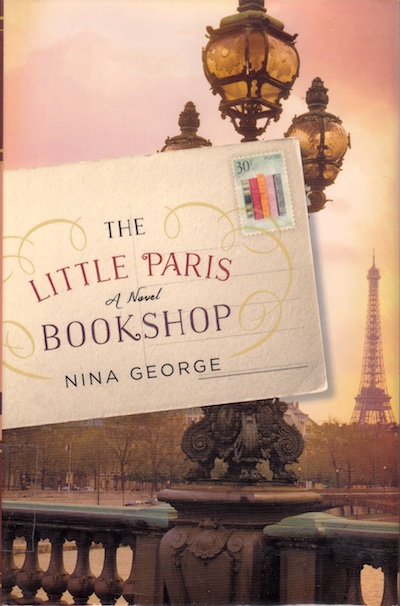 In lieu of a review for The Little Paris Bookshop, I’m going to tell you a story. There’s nothing particularly unique about it. But it has Paris and death, and so does this book.

Once upon a time (in 1997) a young woman of 22 was backpacking across Europe by herself. She had grown up in a college town and then gone to that college and she was desperate to have a major life experience or two outside her town. This trip was something she had been dreaming about for years. It would get her said experience. Nothing big happened, nothing dramatic. But there is something about ten weeks on the opposite side of the world from your family and friends to make a person grow up and figure out who they are. Especially when you’re 22.

Halfway through her ten-week trip, she got tired of being in a new city every few days, converting money (this was pre-Euro), finding a place to sleep, and making new friends. She’d stayed a couple of nights at a hostel in Paris where there were some long-term tenants. She was going back there.

She enjoyed Paris, much to her surprise. She’d been there previously and found it dirty and gray and not at all the shiny romantic vision she’d been presented with in her high school French class. But this time, she hadn’t been looking for shiny and romantic, and instead she found a city that was dynamic and had great beauty in places (but not everywhere, and the contrast made the lovely parts moreso) and had friendly students, many of whom were also confounded by the not-so-friendly French. A couple of them even got the local baker to actually return their smile after a few weeks.

She drank a lot of wine and read poetry for the first (and only?) time in her life.

After she came back to the States, she went to graduate school. She moved away from home, away from the town she grew up in. A few weeks afterwards, she got a phone call: her mother had died in a car accident. She was devastated. She drank too much and made unwise late night phone calls.

She cried – a good friend called her one night and she was crying but happy about it because it was the first time in months that she could see there would be a light at the end of the tunnel. That someday she wouldn’t be devastated that her mother was dead. Someday, it would be a scar, part of her life. She would never not miss her mother, but it would be a fact she could live with. An ugly part of her life that made her appreciate the beautiful parts that much more.

It’s not an especially remarkable story, but it is one that happened. And it is somehow reminiscent of The Little Paris Bookshop and its story of Paris and death and recovery.