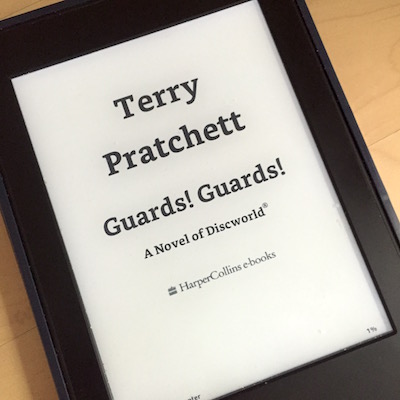 Guards! Guards! is the first of the novels about the Night Watch, a group of police in Terry Pratchett’s extensive Discworld. (Discworld spans 40 novels of varying quality. This is one of the  [many] good ones.) There are only three guards left at this point, but then they get a new recruit – Carrot Ironfoundresson. It’s hinted that he’s the last remaining descendant of the kings who once ruled Ankh-Morpork, the main city of Discworld. He doesn’t move the plot along, though. That has to wait for the next book. This one is about a dragon who keeps being summoned into existence (and then popping out of existence) before deciding to take matters into its own hands.

It’s enjoyable. I downloaded it for a bit of brain candy, and it hit the spot.