The Rules of Magic is a fleshing out of the world of Practical Magic by way of the lives of the aunts from that book – Frances and Jet – and their childhood in the New York City of the 1960s. (I’m not actually quite sure the timeline works. It makes more sense if Practical Magic takes place in the 2010s, but the book was first published in 1995. It wasn’t a big issue, but it occasionally niggled at me.)

But I liked reading about their young lives in the city, and I always like reading about adventures in Manhattan in the 1960s, before it was glammed up in the 1990s. I enjoyed their run-down townhouse on the Upper East Side, I liked their witch shop in Greenwich Village. There are more fleshed-out male characters in The Rules of Magic than there were in Practical Magic, too. It might be a more solid book, in that way.

But it doesn’t have the over-the-top-ness of the prior book. And bits of it oddly took place in Paris, which, while one of the more feminine cities in the world (and one of my favorites), isn’t necessarily a witchy city.

If you enjoyed Practical Magic, you should totally follow it up with The Rules of Magic. I’m not sure it would stand on its own, though.

So, Practical Magic. If you’re familiar with the story, it’s probably because you’ve seen the movie once upon a time. The movie is good – I like it. Very female-centric and all about women solving their own problems. Men are either plot devices or the reward at the end, which is a nice change from the patriarchy. But I’d never read the book before now.

The book is significantly different: after her husband dies, Sally moves to Long Island, and that’s actually where the action takes place, not the old family house in Massachusetts. It’s mainly in Sally’s ranch house in a nameless NYC suburb. The aunts don’t have to go away because they’re by and large not there to begin with (but I can totally understand wanting to use Stockard Channing and Dianne Wiest as much as you can). And there are way more dudes in the novel, though they are still mostly either plot devices or the reward at the end. There is more romance in the book, but it is somehow less the focus of the story. The focus of the story is competent women and girls solving the problem of this creepy, abusive guy who needs to stop haunting them and their neighborhood.

I enjoyed it. Look for a review of the prequel, The Rules of Magic, about the aunts when they were young later this week. I will probably get the pre-prequel, Magic Lessons, once my to-read pile calms down a bit. If you liked A Discovery of Witches, I suspect you would also like Practical Magic.

Many stories start out with either “a stranger came to town” or “xx decided to leave town”. Movement implies change and adventure, apparently. In The Near Witch, a stranger comes to the town of Near, but only Lexi, our main character, can see him. At least at first. His arrival coincides with children starting to go missing. As you can imagine, the townspeople, once they figure out that there is a mysterious stranger in their midst, immediately blame him. Lexi and our stranger have already started to look for the children and to prove his innocence. And yes, the witches of Near are involved, as the title implies.

The Near Witch is a re-release of V E Schwab’s first book, and you can tell that it’s a first book – the plotting isn’t as tight, everything’s a little shaggier than in her later books. But the story’s spark is there, and you genuinely want to know what’s going to happen and care about the characters. It reads a little more like a YA book than an adult book, even though it’s officially an adult book. 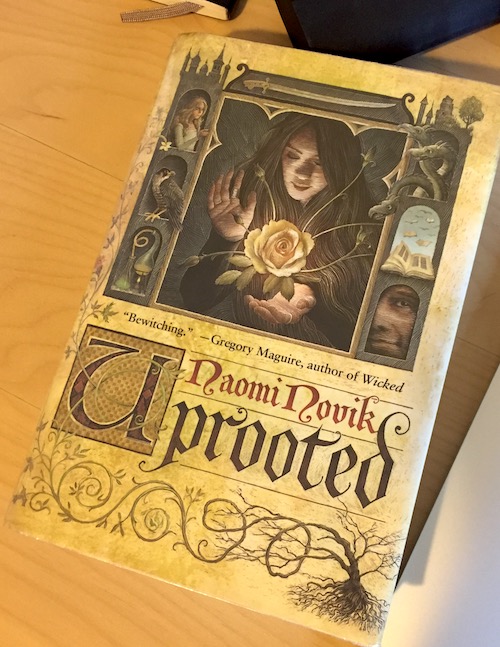 Uprooted was a lovely fairy-tale-esque story about a wizard and his apprentice fighting to defeat a Wood that’s trying to take over a kingdom. It can be summed up so simply, but there is so much action and delight in constructing the world – which isn’t an easy task – but it’s over 400 pages long. I read it in a single day.

Uprooted was a delight and if you like fantasy or fairy tales, I would recommend it.