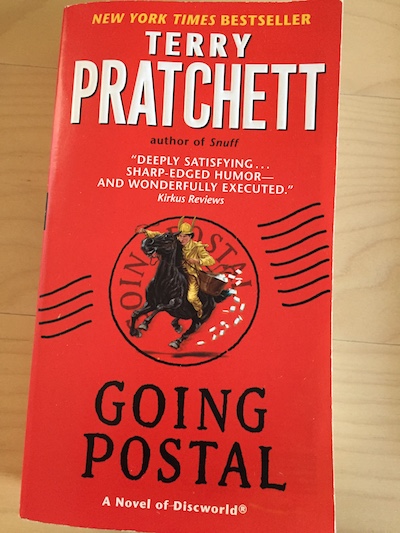 I’ve been re-reading a handful of Terry Pratchett’s Discworld novels – of which Going Postal is one – that show a government that works. There’s political grandstanding, but never for long. The main feature of Ankh-Morpork is that its government works – it’s a mess, but shit gets done and it benefits the largest group of people. The reason that the grandstanding fails is that its been rigged by a group of elites who care more about their privileges than the mob. Beware the mob.

Going Postal is about the ins and outs of the post office and taking it from a non-functioning building full of undelivered letters to a working concern that quickly moves information from one place to another. It’s funny and interesting – our hero is an energetic con artist, and the bad guys are the people unwilling to put in the maintenance to keep a system going.

It gives me patience and hope, honestly.