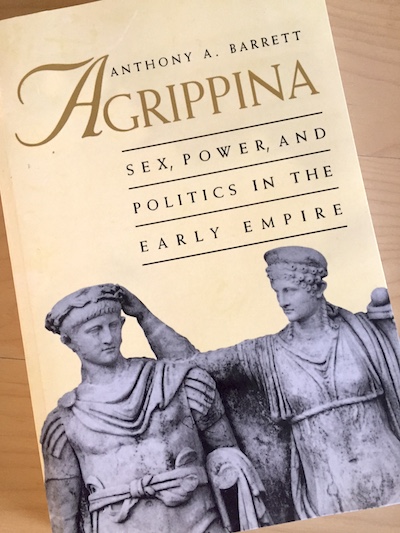 Agrippina, specifically Agrippina the Younger, was a kind of incredible woman who co-ruled the Roman Empire first with her husband Claudius and then with her son Nero. This book has a distinctly feminist take on her.

Agrippina has often been portrayed as a power-hungry woman who would do anything (e.g. setting up Claudius’ prior wife for political downfall, murdering Claudius so Nero would inherit over Claudius’ natural son, sleeping with Nero once he was on the throne to stay in his good graces) to rule Rome. Mr Barrett’s take on it is as follows:

So when she’s implicated in a sex scandal, it’s important to look around and see who benefits and who else is being taken down with her. That’s going to show you what’s really going on.

Here are the facts: she was raised by an extraordinarily determined mother and her dead father was worshipped by the military. When she was around Caligula (the emperor before Claudius and her brother), he wasn’t such a crazy asshole who tried to kill everyone. Claudius’ reign was much smoother when she was his wife than when he was married to his prior wife. Nero didn’t go off the rails until after she was banished (and then he had her killed to keep her from coming back). Shit worked when she was on the scene.

So maybe consider that the contemporary reports were written by gossipy people with a strong patriarchal bias and should be taken with a HUGE grain of salt.

I liked this one.