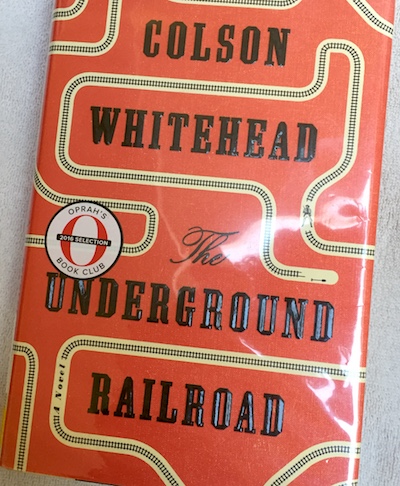 The Underground Railroad was, as we all learned in history class, the network of people who helped slaves escape the American South. In Whitehead’s book, the railroad is a real thing, with tracks and trains running at irregular intervals to which people away to the next station.

Cora is a third-generation slave who decides to use the railroad to escape once it becomes clear that rape is in her immediate future. She runs from Georgia to the Carolinas, to Tennessee, to Indiana to show all of the different ways to be enslaved: plantation labor, in the city (the work program she’s in turns out to be part of a larger eugenics plan), hiding in a small nook in a hot summer attic for weeks on end.

She’s pursued by Ridgeway, a slave catcher by nature. He’s evil and wears a necklace of human ears to show that he’s also somewhat deranged.

There’s death all over this book. Cora kills a young man who is part of a search party that temporarily catches up with her and her two fellow escapees. Ridgeway kills so many people as he hunts Cora. The town where she hides in the attic regularly lynches anyone even suspected of helping blacks.

Slavery and racism are ugly, violent, brutal things. The Underground Railroad makes that clear. It makes me, the white reader, feel guilty and uncomfortable. And it should. Slavery is one of the foundational sins of America, something we have never fully atoned for. Listening to its stories, bearing witness to something I’ve been taught to look away from is a start. But only a start.