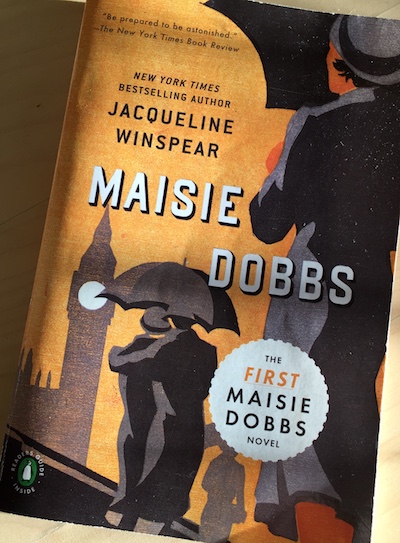 I’ve read other books in the Maisie Dobbs series, but never the first one. So, it was a pleasure to get her backstory, to learn where she came from and what a truly extraordinary woman she is.

The Maisie Dobbs series takes place in London in the 1930s. She’s a private detective, well-read and thoughtful, who solves crimes, mostly murder, amongst a certain class of people. (They may not all be a certain class, but they are all filtered through that certain class’s lens.) Maisie has humble origins, but has worked hard to grow out of them.

In Maisie Dobbs, we learn that she went to work as a maid for a progressive wealthy woman who caught Maisie working her way through the library before her morning shift started. Instead of firing her, she found her a tutor and sent her to college; Maisie dropped out to go be a nurse during WWI. It’s a characterization that is at once intelligent and practical and will appeal to anyone who wants to put their world in order.

It’s a slim book, and the mystery takes up only about a third of the story. The rest is devoted to the backstory and setting up the relationships as they are now. It is a book designed to kick off a series. It’s done its job well.