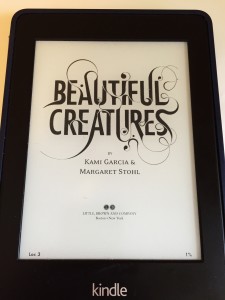 What’s it about?
Beautiful Creatures is about a very weird girl, Lena Duchannes, in a very conformist small town. It’s told from the perspective of Ethan Wate, a local boy who is instantly taken with her. Lena is magical and will be chosen to be either Light/Good or Dark/Evil on her sixteenth birthday. It’s all or nothing in this particular world. Lena and Ethan use their cunning and her powers to attempt to ensure that she will not go Dark.

Why should you read it?
Honestly, I wouldn’t. It wasn’t a do-not-finish for me, but it’s heavy-handed. Making your main character an instant outsider (like Lena) or an insider-who’s-hiding-his-outsiderness (like Ethan) is a great way to make your literary reader identify with them. It feels like a cliche. And then there’s the whole dark-light magical thing. The world only feels like it’s black and white; it’s really full of gray. The grayness is not as revolutionary as Beautiful Creatures wants it to be. It’s the first in a series I won’t be continuing.