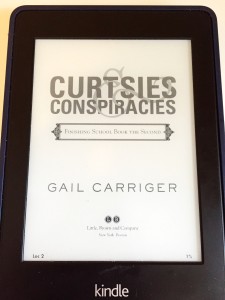 What’s it about?
Curtsies and Conspiracies is about nothing, but that’s ok. I mean, there was a plot – the macguffin from Etiquette & Espionage is elaborated on and there are some interesting embellishments on  vampire culture in alternate steampunk Victorian Britain. But otherwise? It’s still about the setting: a young girl at a finishing school, having adventures.

Why should you read it?
Because it’s the sequel to Etiquette & Espionage and you didn’t want that one to end. That’s why you should read it. You do also learn the identity of the handsome rake the main character danced with at her sister’s coming out ball. That said, this book is definitely a sequel – it doesn’t stand on its own. But it’s a good continuation.