Inseparable is a novella – 128 pages – about love. Andrée’s story is told from Sylvie’s perspective. Andrée and Sylvie are two middle-school-ish aged girls when they meet in WWII Paris. (The war itself is incidental, and the story covers their lives until they are through university.) Sylvie falls in love with Andrée, but it’s a girl crush kind of love, or maybe puppy love would be the best way to describe it. Andrée doesn’t realize the depth of Sylvie’s feelings, in part because she is so enmeshed into her family and mother. They will always come first for Andrée.

When they are older – in university – Sylvie meets Pascal, with whom she is great friends. Sylvie introduces Pascal to Andrée, and the two of them fall in love. (Sylvie is not outrightly jealous of this, but it’s deeply unclear to me if that’s really the case. She does seem to be genuinely happy for them.) At the end of university, things get complicated. Andrée’s family comes first, right? But they’re very bourgeois and Catholic and straight-laced. Andrée had had to fight to even go to university in the first place. Marriages were arranged by families and had nothing to do with love. Pascal’s family was not in Andrée’s family’s social circle, and romantic relationships outside of marriage are unheard of. Andrée’s family gives her an ultimatum: she can stay in Paris and become engaged to Pascal (a thing he does not want) or she can continue her studies in Cambridge (a place she very much does not want to go). It doesn’t end well.

Because this is de Beauvoir and she is concerned with existentialism, thinking about Inseparable even a little bit raises all kinds of questions about the nature of love. One half of a couple always seems to be more in love than the other – what does that mean for relationships? Was Sylvie in romantic love with Andrée? (Yes.) Did that matter? (Not really.) What is the boundary between friendship and romance? Is Andrée really in love with Pascal or does she just see him as an escape from her strict family (whom she loves but she does not fit in with)? Is Pascal a heel? How desperate is Andrée?

I really liked Inseparable and would recommend it to anyone. 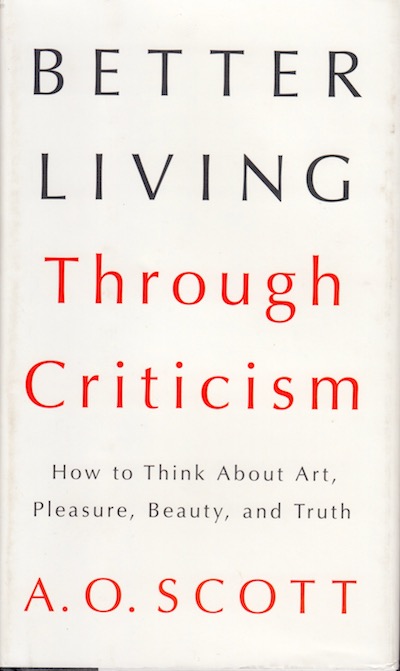 Better Living Through Criticism isn’t so much about how to think as it is about why to think. It’s about doing more than just reacting to what’s in front of you; consider it, put it in its context, know who made it and possibly tease out why it was made.

One of the mistakes we as a people make is to think that culture is somehow universal, in the same way that, say, mathematics is. It’s not. My reaction to a book I’ve read is necessarily personal. It’s going to be a reaction to what I’ve read in the past and who I am as a person. But I can take a step back and ask things like “what is the author trying to do here?” and “does this say something larger about society?” or whichever questions seem appropriate.

I will confess that I enjoy reading more and am a better reader because I write these short reviews. I also occasionally participate in NaNoWriMo, not because I think the world needs to hear my stories (I have never shown one to anyone), but because the more I try to write them, the better a reader I become. Thinking helps.

Which is the point of the book: thinking helps in both reading and life. It helps you (me) be a happier, less stressed person. I’m going to keep doing it. 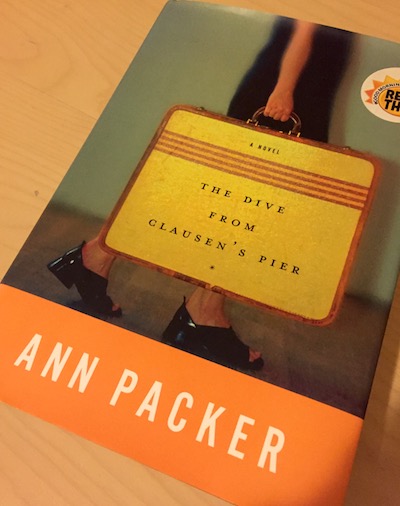 Once upon a time, I read The Dive from Clausen’s Pier. I over-identified with the main character, Carrie, who was from Madison, like me. She went to the University of Wisconsin, like me. She had the same boyfriend through high school and college, like me. When we both left Madison, it was all tied up in feelings of loss and wondering who we really were. Leaving Madison helped both of us figure out who we were.

So, in the novel, when Carrie goes back to Madison for a visit and it becomes clear that she’s going to stay. I got angry. Very, very angry. I finished the book, put it down and did not pick it up again for almost 14 years.

It was with some trepidation that I picked it up off the shelf a couple of weeks ago. “I’ll just read until she leaves for New York. I’ll skim it, it’ll be fine.”

Much to my surprise, time from both the story and Madison gave me the distance I needed to appreciate what Ann Packer had to say about the city where I grew up, the patriarchy, stability, love, and friendship.

Don’t get me wrong: I put it down when she returned to Madison. I still can’t deal with her going back. It’s too… No. Carrie, you were on your way to happiness, a career in fashion (a thing you clearly love), a relationship that wasn’t based on you taking care of him. Just, NOPE. Stay gone. Stay yourself.

But that’s not the story. And that’s ok. 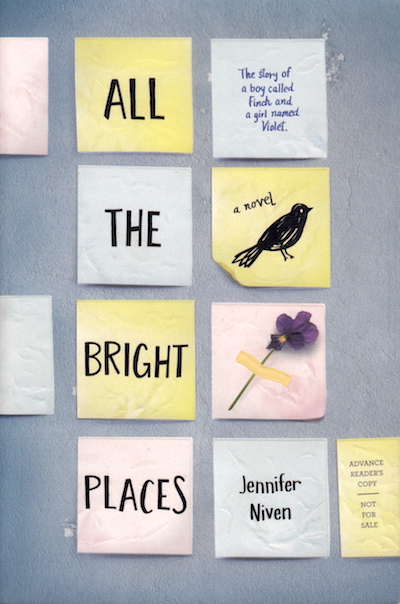 Oh, All the Bright Places was a lovely story. Which seems like an odd thing to say about a book about depression. But both characters, Violet and Finch, are treated with such care and attention and, well, love.

Finch is manic-depressive, has been his whole life. Violet was in a car accident last year, and her sister died. She’s depressed, but in a different way. They meet one morning when they’re both thinking about committing suicide. It’s less sad than it sounds. He talks her off the ledge (literally) and then follows her down.

Long story short, Finch goes into a manic phase, Finch and Violet end up in a relationship, and things go from there. Violet starts to come out of her depression, and Finch’s manic phase ends. It’s not always easy to read, but it is always compelling. 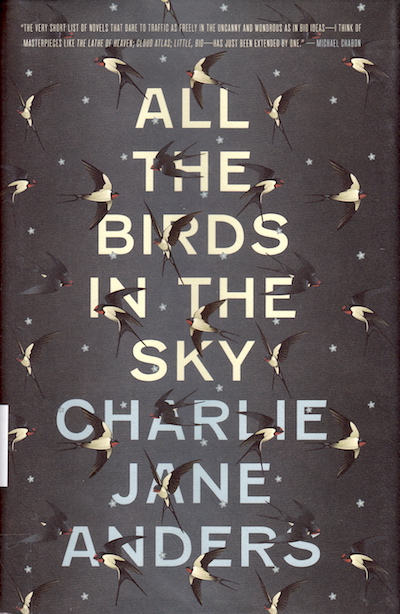 All the Birds in the Sky was, for me, a tightly written three-act near-future novel about the clash of technology and magic (read: nature). I really enjoyed it.

There are two middle school aged children, Patricia and Laurence, and they are both freaks in that special middle school way. They almost become friends before they go their separate ways. As adults, they meet up in near-future San Francisco. Laurence is part of a tech incubator whose goal is to reach other planets sooner rather than later. Patricia is helping her fellow people via healing magic. The world is falling apart, and that accelerates. Clearly, humanity needs saving; will it be technology that will get us to the other world(s) before this one is destroyed or will it be magic that fixes it all?

This book is very much A Good Thing and worth your entertainment time. 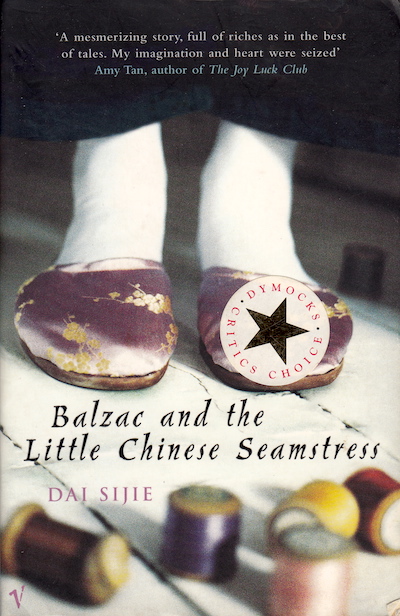 Imagine that it’s the Cultural Revolution, and your parents were intellectuals. You get sent off to be “re-educated”, which just means doing the menial labor no one else wants to do. It’s a small town, with no technology, no entertainment. Just work. You and your fellow male re-educate-ee discover two things: a pretty girl and a book by Balzac. What happens? What would you do to make your lives a little more enjoyable?

That’s the premise of Balzac and the Little Chinese Seamstress. It has been highly praised, and it was a fine book. My expectations, however, were too high. It was not as good as promised. I didn’t feel the weight of carrying buckets of shit up mountains each day, and I didn’t feel the relief of the occasional happy moment. I understand that a) menial labor sucks and b) getting a chance to relax after back-breaking work is a wonderful, wonderful feeling.

It’s a perfectly fine book. But I was expecting more. 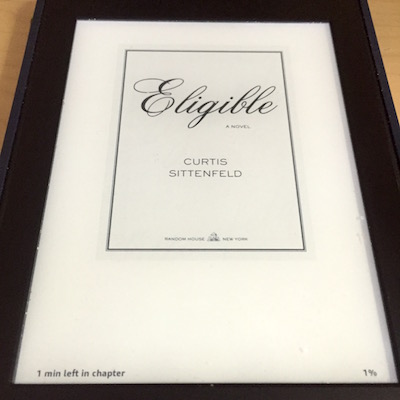 Is this where I reveal that I’m a sucker for a modern retelling of an older story? Or, particularly, of Jane Austen stories? I enjoy seeing how the situations change to keep the same characters and traits and dynamics amongst them.

Eligible is a retelling of Pride & Prejudice. It takes place in Cincinnati, Darcy is a neurosurgeon, Lizzy is a magazine writer. They are both almost 40, and Lizzy has her large family. She and yoga instructor Jane are back home from NYC because her father is recovering from a heart attack. Her family is as atrocious as you’d expect.

Sittenfeld ably handles the material, turning it into an enjoyable story even though you probably know how it goes. Sometimes the joy is in watching the process unfold. 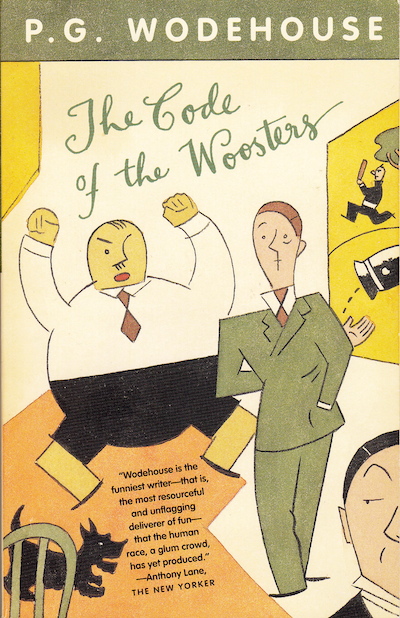 I could pretend that The Code of the Woosters is about making fascists look like idiots – and it is, a teeny-tiny bit. But really its about the goofy adventures of Bertie Wooster, getting engaged to two different young ladies, neither of whom he wants to marry (neither of whom want to marry him, either), and how Jeeves, the amazing butler somehow makes everything better.

All the Jeeves books are fun and light and worth a laugh. Definitely recommended. 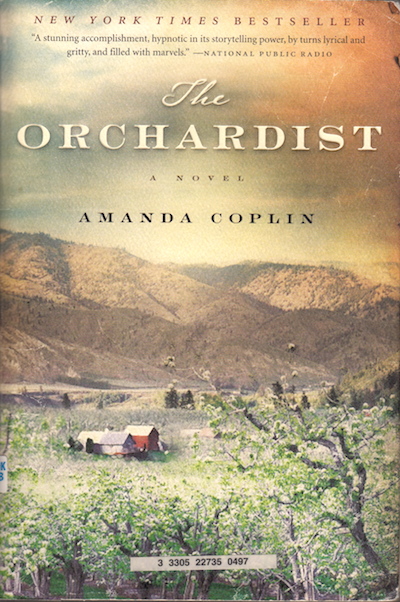 The Orchardist is a lovely story about a man, Talmadge, who runs/owns an apple orchard in central Washington in the late 1800s – early 1900s. It describes a quiet, isolated life that is disrupted when two girls come into the valley. They’re pregnant and they’ve run away from some truly horrible circumstances. The Orchardist describes what happens over the next twenty years in a way that illuminates loneliness, the solitary life, and the weirdness of families. Recommended. 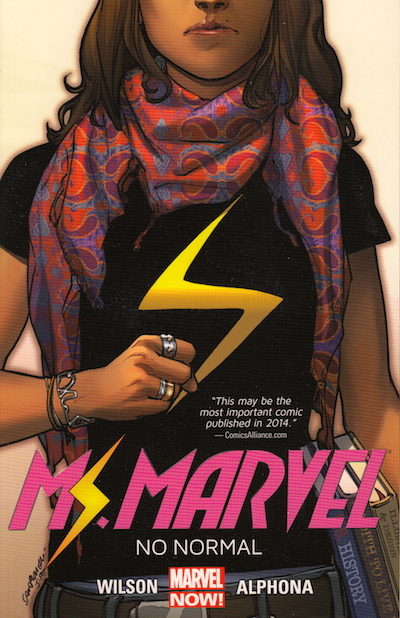 What’s it about?
Kamala Khan is like any other girl in the Marvel Universe – interested in the Avengers, but really just trying to live her life. She’s muslim, and trying to please her family and do well in school. Then something happens and she becomes the new Ms Marvel. She tries to imitate the old Ms Marvel – blonde Carol Danvers – and fails miserably. It’s only when she uses her super-powers to become a better version of herself that she succeeds.

Why should you read it?
I’m not a comic book person. But I’d heard good things about Ms Marvel v1, and I enjoyed it. I like empowered women, and thus empowered girls. It’s a good adventure *and* the story is all about the more you you are, the more powerful you are.

I’m going to keep going with this series, I suspect.