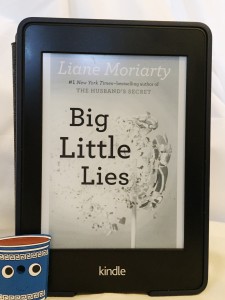 What’s it about?
Big Little Lies is a murder mystery in that someone dies and the story is ultimately about putting the world back together. But it’s not structured like a typical mystery: the death isn’t until almost the end, and the world keeps getting messier and messier until suddenly it’s not messy at all. It’s about a group of parents who all know each other because their children all go to kindergarten together, and how they all relate. It’s not a heavy book, but I was expecting something even lighter going in. (I blame the cover.)

Why should you read it?
It’s a good story, that’s why. It’s well told, it’s gripping (I stayed up late to finish it), and it made fun of school politics from the parents’ point of view. School politics always deserve to be made fun of. I like this trend of writing more books aimed at working parents that treat the parents as people who both love their children and want to have lives of their own. I’m avoiding writing about the murder mystery part of the book because I don’t want to spoil it, because I suspect many people will read it. It’s very well done.