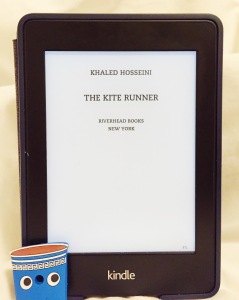 What’s it about?
The Kite Runner is about Afghanistan. It was, I think, written to personalize Afghanistan to America, by an Afghani immigrant to the US. It was published in the year after 9/11, I’m sure because there was such a voracious appetite for any information about Afghanistan at that time. The story in the book is about a boy, Amir, and his servant boy growing up together; they are separated by a tragedy that Amir does his best to make up for as an adult.

Why should you read it?
It really does serve as an introduction to Afghanistan to a Western audience. Is it sanitized/caricatured for Western eyes? Probably. But introductions are often like that. There are also some clunky metaphor moments (it is Khaled Hosseini’s first novel), but it is overall a good story. The main character isn’t particularly likable – which is a whole other debate, should characters be likable? – but I was moved by the overall story. In a good way.

Look, The Kite Runner was incredibly significant when it first came out – there were no common Afghani-American stories available. This is a lovely introduction to the country and the culture.