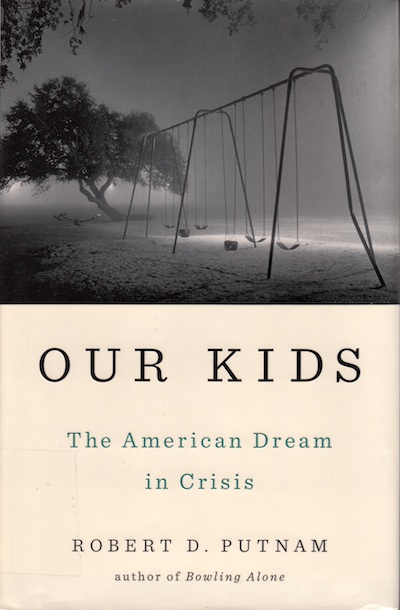 What’s it about?
Our Kids is about inequality in America, particularly as it affects American children. We say that it takes a village; the thesis of this book is that the village is only intact for children of parents with at least a college education. If your parents don’t have a college education, if something has come up in their lives to stop them completing college, then you are less likely to be able to complete college and get ahead in the world.

Why should you read it?
There is an entire literature out there about the downfall of the American family. I like this book because it emphasizes that children are not just the product of their parents, but of the communities they live in. Success is a social norm that people in the neighborhood conform to. If a child isn’t on the path, then he or she gets help, usually with input from his/her parents. (There’s a whole other issue there – too much conformity towards success leading to things like “Why Are Palo Alto’s Kids Killing Themselves?” Could it possibly be that self-selection hurts everyone?) But in the neighborhoods with bad schools, the sense of community isn’t as strong. Dr Putnam shows that people with lower incomes have fewer social ties, and are less likely to know someone who can help when they or their children are having problems.