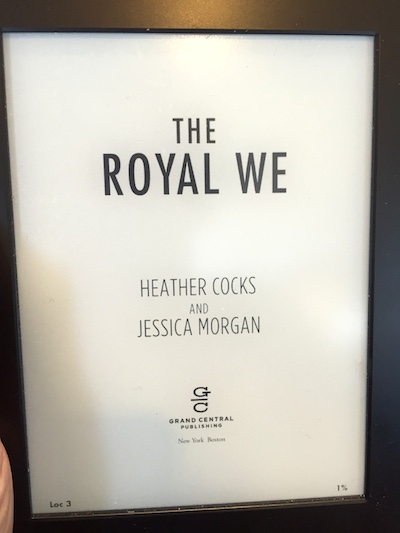 Embarassingly, I read The Royal We more than two months ago. I would have sworn that I wrote a post about it. But looking through my drafts and posts… it never made it out of the (very) rough draft stage. So here it is, much later than it should be.

What’s it about?
Bex is going to Oxford to study art. She lands in a suite that includes Nick, the future King of Great Britain. There are some shenanigans, but they fall in love. This is where the story really starts: Bex (a girl from Iowa) learns what it’s like to be in a relationship with someone whose entire life is – and will always be – in the center of a media scrum. What is it like to go from being a fairly laid-back person to not being able to make a move without it being scrutinized? How would it change you? Could you have a normal relationship? What would your life be like? Most importantly, what would you wear?

Why should you read it?
You should read The Royal We because it’s totally adorable. Nick and Bex are a very cute couple (his characterization falls off a bit towards the end); the supporting characters are largely fully realized people; I believe that these are the reactions of normal people put into very weird circumstances. It’s no secret that the story is inspired by the whole Wills-and-Kate relationship; in fact, you could read this as extended fan fiction of the British monarchy. But that’s ok – it’s so charming and lovely (I read it in one sitting, practically) that it’s worth your time.