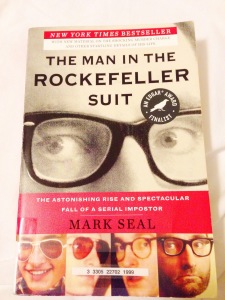 What’s it about?
The Man in the Rockefeller Suit is a true crime novel about a German man who didn’t like who he was. So he pretended to be a series of other people, including a man called Clark Rockefeller. He implied that he was an illegitimate Rockefeller cousin, deceived a many, and conned a lot of others out of their money. He was caught when he tried to kidnap his daughter (after he lost custody of her in a divorce).

Why should you read it?
Because it’s a fascinating story, to think that someone could get away with impersonating American royalty for more than a decade without getting caught. It’s a news-y account – Walter Kirn also has a book about Clark Rockefeller, but his is more memoir-ish. This is a report of who Clark Rockefeller was and how he spent his adult life. I’m surprised that I hadn’t heard about him before reading this book, honestly. It seems like it would be right up American’s true-crime alley. It’s a good, light read.