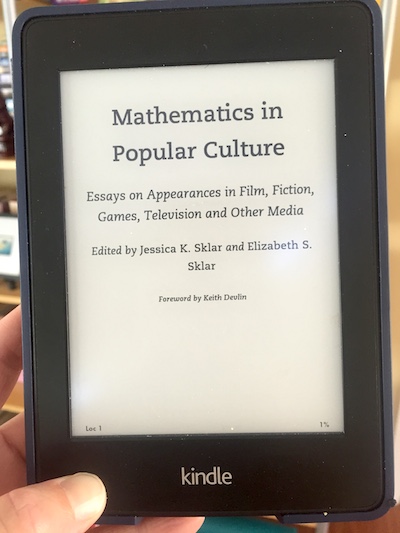 What’s it about?
Mathematics in Popular Culture is a group of essays written by a number of different math professors. They cover various aspects of how math is represented in popular culture – are mathematicians portrayed as crazy? What does math phobia look like? What is game theory? Is it important that Lindsey Lohan’s character in Mean Girls is good at math? It hits all kinds of pop culture: Lost (TV), Cryptonomicon and Moneyball (books), Good Will Hunting (movies), and the tarot (games? belief systems? I’m not sure how how classify that one). It’s kind of all over the place.

Why should you read it?
Oh, I  don’t know that you should. Have you at least taken calculus? Can you deal with academic writing? If so, I’d recommend it. But this work isn’t for the general public (though, I’d LOVE it if someone wrote a series of essays on math in pop culture for general consumption). Overall, the topic is a good one, but it was sometimes rough going.