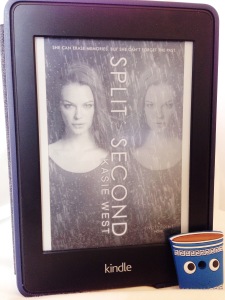 What’s it about?
Split Second is a sequel to Pivot Point. Which means that it’s about the choice that Addie makes in Pivot Point and its fallout. It’s also about her best friend, Laila. It finally makes her into a full character with quirks and foibles instead of just a good-hearted rebel. Also, the author begins to dip her toes into exploring some of the more societal questions when you live in a world where everyone can manipulate everyone else’s perceptions. What is real? How could “reality” be used and abused by those in power?

Should you read it?
Yes, if you want to get closure on Addie’s & Trevor’s relationship, and if you want to see Laila become a full person – she’s pretty awesome. The world-building political questions kind of felt like they were explored because the author thought she should instead of really wanting to. If that makes sense. It was an ok book, not particularly good or bad. That’s ok too – I enjoyed what it delivered. I am glad there’s not a third book. I don’t think the story could be stretched that far.