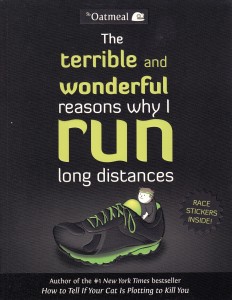 What’s it about?
If you read The Oatmeal, you know that he is funny and likes to explain things. The Terrible and Wonderful Reasons Why I Run Long Distances is an expansion on his strip of the same name. It’s about how out of shape he used to be, stories about particular runs he’s taken, and, of course, the Blerch. The Blerch is the embodiment of the little voice inside you that tells you to be lazy. To not try. To not go for that run because that would be hard and wouldn’t you rather sit on the couch? His goal is to outrun the Blerch.

Why should you read it?
Well, because it’s funny. Because you enjoy running. Because the Blerch is a great embodiment of all the times the voice in your head has said “why not watch one more television show?” or “why not put off cleaning your house?” It applies to everything, not just running. It’s just that with running, you can actually, physically, try to get away from it. It is either a motivating book, or just a funny one. Either way, you get to decide.