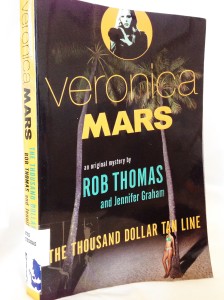 What’s it about?
Veronica Mars and the Thousand Dollar Tan Line was written to appeal to fans of the series – it came out around the same time as the movie. It takes place after the film, so it’s a way for fans of the series to continue to get a glimpse into Neptune, CA. The actual plot is probably irrelevant to its target audience. (It’s Spring Break, all the undergrads have come to Neptune to party and tan, and a girl goes missing. The sheriff is particularly incompetent, so the local Chamber of Commerce hires Veronica.)

Why should you read it?
It turns out that Rob Thomas actually wrote a couple of YA books before moving on to television. While Veronica Mars and the Thousand Dollar Tan Line isn’t great, it is enjoyable and well constructed. All the plot threads tie up at the end. All your favorite characters are back. (Though there’s a depressing lack of Logan. Ah, Logan…) If you haven’t seen the show and movie, you’ll probably be at least a little confused – it doesn’t do much world building. Yes, it appears that this will become a book series, and yes, I’ll read the next one.