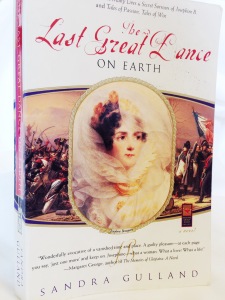 What’s it about?
The Last Great Dance on Earth is the third of three novels about Empress Josephine. This book remains a very intimate portrait of her and her family, their loves and lives. But it’s probably the grandest part of her story. She’s fully in the palace, living the life of an empress, haunted by what happened to Marie Antoinette. Her continuing inability to get pregnant with Napoleon’s heir (likely because of her imprisonment during the Revolution) leads to their eventual divorce, where she moves to a country house (still a small palace). Napoleon is shown to continue to love her – wikipedia even states that “he had married a womb” (of his second wife). Little mention is made of Napoleon’s love affairs. I suppose it is the French myth that a man can remain married to one woman while having sex with many; a woman must remain loyal to her husband. To be fair, the first book does address this point – Josephine learns that this is what is expected of a good French wife. This volume chronicles her downfall – the complications of life at court, his family’s continuing jealousy and scheming, and her eventual death at her home in suburban Paris.

Why should you read it?
Because the three books together make up one story. There is no drop-off in quality from book to book and they really do read as one whole, split into three to make them manageable. It wouldn’t surprise me to find that the publisher releases them all as a single volume some day. They are a lovely portrait of life in Revolutionary and Napoleonic France.