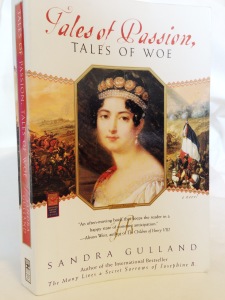 What’s it about?
Tales of Passion, Tales of Woe is the second of three books about Empress Josephine, of Napoleon & Josephine fame. The three books make up one seamless story of Josephine’s entire life; this volume covers the time she marries Napoleon until just after he is crowned Emperor of France. It’s a surprisingly intimate look at their lives, given the sweep of events that lead Napoleon from a capable general to Emperor of France. We learn about their passion for each other as well as the petty jealousies of the Buonaparte family. Though, I suppose, when an empire is at stake, can the jealousy really be petty? It sure reads like it, though.

Why should you read it?
Because all three books are a good overview of what the French Revolution must have looked like, at least a little bit, from the inside. Not to mention that Josephine is an awfully likable character. You feel for her dread of telling her children she’s remarried, her pain at not being able to get pregnant again, her growing love for her husband. It’s a pleasant historical fiction about a very famous woman.