Here’s what I thought No Stopping Us Now was going to be: ways in which older American women have been awesome and examples of them being awesome, defying stereotypes of women of a certain age being boring and invisible. What it actually was: a chronological history of how older women in America have been sidelined and excluded, with the few exceptions that have defied the systematic discrimination of both sexism and ageism.

I found that I couldn’t adjust my reading attitude to compensate. I just didn’t want to read the ways society has sidelined older women throughout history. So I started skimming, only reading closely when the examples of older women being taken seriously as whole people were mentioned. And then I was fine. But I couldn’t read the full book as it was written.

The White Princess is a family drama, it’s just that the family is royalty and all of the family politics is on steroids. It takes place in the immediate years after Henry VII has become king, right after the Wars of the Roses. He marries Elizabeth, daughter of a prior, much-beloved King, Edward IV. The story is told from her perspective

Elizabeth deliberately keeps herself ignorant so she can live and be queen of England. Her mother is plotting to get one of her own relatives to overthrow Henry VII, meanwhile he’s running everything in tandem with his mother, Margaret. Elizabeth’s mother-in-law should have been queen. Honestly. She puts Henry VII on the throne because it was unthinkable that she could have been in charge. Everyone would have been better off if she had; Henry VII would have been happier as a person instead of as a king. He comes off as paranoid and incompetent for ignoring his wife who a) knows how to rule and b) is just trying to survive.

The White Princess is very much recommended if you like either family or historical dramas.

I wanted so badly to like The Witches. Stacy Schiff has a lovely storytelling writing style, and the history of witches is interesting! (Ok, that’s a link to a specific story about witches in Norway, but I loved it and wanted to take this opportunity to share it.)

But her storytelling style of first-this, then-that was ultimately confusing. There are too many people in this book without enough context, both in terms of relationships between people and historically. I did get a good idea of why some of the suspicion existed between neighbors, a sense the isolation of New England in the late 1600s, and the weird city-country dynamics that affected how the situation played out.

But ultimately, I was done in by the fact that there was so much detail about each individual, who was accusing whom, and what specifically was going on, that I lost the forest for the trees. I ended up putting The Witches down when I didn’t want to. But the reading was so hard (and my to-read pile so big) that I felt like I had to. Maybe I will pick this up again at a later date when I have more time and brainpower. 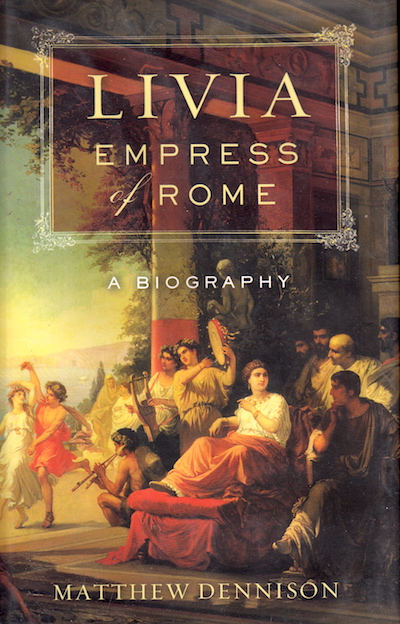 Even those of you who don’t like to read about Ancient Rome have probably heard of Augustus Caesar. He’s the one who saw Rome through its final leap from Republic to Empire. He was, by all accounts, intelligent and fairly ruthless. Livia was his wife. She – as most powerful women do – got a bad rap, particularly from Robert Graves’ I, Claudius. *

This seemed like a good opportunity to read a book about someone who’s pulled all the tidbits about Livia together into one coherent story. It should be interesting. Alas, it wasn’t. Records about women tend not to survive this long; the paucity of information means that the author relied on general observations about life at this time. That wasn’t what I wanted to know about. I remain dissatisfied.

There may very well be a good book about Livia out there. But it wasn’t this one.

* Which is a wonderful soap opera and a great opportunity to see Patrick Stewart with curly hair. Highly recommended.

I listen to a lot of history podcasts. I enjoy history. I am also often frustrated with the lack of women at the center of the story. In some ways, that’s understandable: much of the world was run by men in the past, which means they wrote the histories. As a woman, though, it’s occasionally frustrating. As a mother looking to give her daughter more female role models, it’s downright infuriating. (Seriously, there’s The History Chicks – who do a great job – and that’s about it.)

So, I am starting to fill that void. I’m going to write a series of posts about royal historical women. That’s my niche: queens, princesses, pharaohs, tsarinas, empresses… If you’re a dead woman with a title, you’re eligible.

My plan is to eventually move this to its own website, but as I’m starting my research, I figured this would be a good place for a test run. There won’t be podcasts – not at first, anyway – but every Thursday there will be a short-ish post about a time period in a ruling woman’s life.

I’m starting with a series of posts about Cleopatra, who is not the original boss lady, but is one of the most famous. I’ve got my eye on Queen Christina of Sweden, Indira Ghandi, Eleanor of Aquitaine, Catherine the Great, Hatshepsut, and many, many others.

My knowledge is mainly European based, and this is a shortcoming. If you have suggestions for any rulers, particularly African, Asian or Native American, I’m all ears! Please tweet them to @katedp.

I hope you all enjoy reading these posts as much as I enjoy writing them.